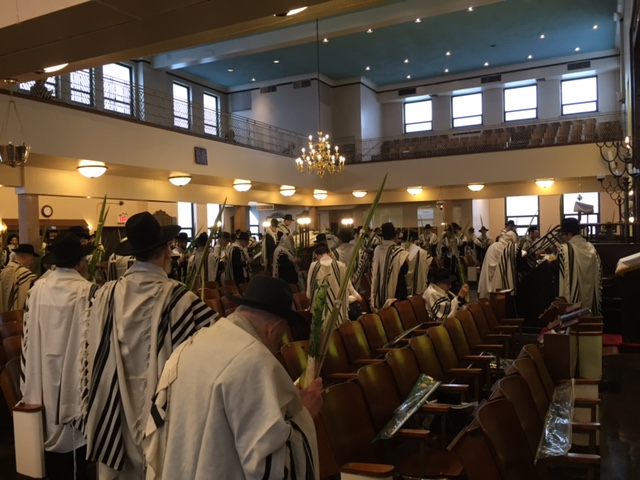 The Ma’aravis piyyut for the second night of Sukkos commences:

Dear and pleasant ones will rejoice in their festivals

Protected in the shade of the sukkah for seven days

They shall delight in it with various types of delicacies

The beloved ones fulfill its mitzvot

Similar to all piyyutim, which were authored by great sages primarily during the era of the Rishonim, deep messages are embedded in the fabric of this Ma’aravit hymn. Let’s take a close look.

Rav Yitzchak Zev (“Velvele”) Soloveitchik, zt”l, the Brisker Rav, noted that there exists a fundamental difference between the simchah of Yom Tov and of Purim. On Purim, we engage in “Mishteh” – Feasting – replicating the festivities experienced by the Jews in the Persian Empire upon being saved from death. The raw act of Mishteh, as manifest through Seudat Purim and drinking during that seudah, constitute the mitzvah. In contrast, with Simchas Yom Tov, the physical pleasures are not themselves the essence of the mitzvah; rather, these pleasures engender a spirit of simchah, bringing one to joyously connect with Hashem. Simchas Yom Tov is the simchah of rejoicing in Hashem, and it is merely fueled and elicited by tangible delectation, which serve as backdrops to joyously experiencing the Shechinah. Rav Yosef Dov Ha-Levi Soloveitchik zt”l of RIETS explained the distinction between the simchah of Purim and of Yom Tov in a somewhat similar manner, expounding that Simchas Yom Tov is a Simchah She-ba’Lev (Simchah in the Heart) and is a function of being Lifnei Hashem (Before God) on Yom Tov – a state that is precipitated by the Kedushat Ha-Yom, the Sanctity of the Day. On Yom Tov, each Jew is in the close proximity of the Shechinah, as it were, which inspires joy. (V. Reshimot Shiurim: Sukkah p. 218-219.)

In our liturgy, the sukkah and the Beit Ha-Mikdash are often compared. In fact, the Ma’aravis under discussion here continues, immediately before the berachah of “Ga’al Yisrael”:

Build Your Sukkah and raise up the fallen one

Establish its foundations and erect it on its mount…

What is the connection between the sukkah and the Beit Ha-Mikdash?

Life in the Midbar, where our ancestors wandered and trekked toward Eretz Yisrael three-and-a-half millennia ago, was a 40-year spiritual high, in which Hashem’s Presence was palpably felt, as He supernaturally tended to our every need and graced us with His closeness. Although the Midbar experience was relatively short-lived, its essence was captured and maintained in the confines of the Beis Ha-Mikdash, which served as the perpetual repository of intense Hashra’as Ha-Shechinah (Manifestation of God’s Presence) and live miracles on display, preserving and sustaining these central aspects of life in the Midbar. Similarly, the sukkah, which hearkens back and corresponds to our being sheltered (supernaturally or physically – Sukkah 11b) throughout the Midbar experience, is not a trifling, token memento of life there, but rather captures and replicates it, as we commemorate 40 years of living in the veil of the Shechinah. The sukkah in its own way reenacts life in the Midbar, expressing and reproducing the sensation of being safeguarded in Hashem’s Shadow. This is the significance of the Kabbalistic and liturgical references to the sukkah’s “Tzeil” (“Shade” or “Shadow”), connoting the sukkah’s role as providing a glimpse of life in the Shadow of the Divine, and it explains why the sukkah is repeatedly compared in our tefillot with the Beit Ha-Mikdash.

This concept gives rise to a remarkable idea regarding the mitzvah of Simchas Yom Tov. Although Simchas Yom Tov is to be fulfilled as prescribed in the sources cited above (and of course in accordance with the Shulchan Aruch – Orach Chaim s. 529), there is an additional aspect of simchah to be experienced in the sukkah, where one is likewise before the Shechinah, insofar as the sukkah reflects spiritual life in the Midbar. Just like Simchas Yom Tov is manifest by the joy of being in the Presence of Hashem – and that is why the special mitzvah of Arba’ah Minim in the Beit Ha-Mikdash is denoted by the command of “and you shall rejoice before Hashem your God for seven days” (Vayikra 23:40; v. Rambam: Hil. Sukkah 7:13) – so too is there great simchah by dwelling in the sukkah, where we are within the veil of Hashem and the locus of His Shadow. The elation aroused by this experience is a specialized form of Simchas Yom Tov, which our piyyut most understandably addresses as such. We can now appreciate the otherwise mysterious logic of the Ma’aravis and its connecting Mitzvas Yeshivah B’Sukkah with simchah.

For me and probably for everyone, the onset of Sukkot, and in particular the mitzvah of Yeshivah B’Sukkah, are a spiritual rhapsody. I am convinced that the distinct and exceptionally uplifting sensation of being in the sukkah is not mere nostalgia or sentimentality, but is rather the result of an encounter with the Shechinah, as we are privileged to spend a week in the Tzeil of Hashem and to delight in His closeness.

ENDNOTE ON RECITAL OF MA’ARAVIS:

Based on the position of the Vilna Gaon (Ma’aseh Rav s. 162), the minhag of most yeshivot is not to recite the Ma’aravis liturgy. Nonetheless, despite his personal minhag of omitting these piyyutim, Rav Soloveitchik instructed his minyan at the Maimonides School in Brookline, MA to recite them, as the Rav felt that since they are printed as part of the standard Yom Tov tefillah, omitting them would send the wrong message to his congregants, who were well aware of the non-Orthodox movements cavalierly excising various sections of the davening. In order to demonstrate to his congregants that we are not at the leisure of making such changes at whim, and that the siddur cannot be cherry-picked but is instead an authoritative and fixed text, the Rav made sure that the Ma’aravis hymns were recited at his minyan.

The piyyutim, which were authored by preeminent gedolei Yisrael of the Medieval Ages and earlier and are cited by Rishonim to support important halachic and homiletic interpretations, are loaded with erudite Torah concepts and are rife with profound insights and intense inspiration. The Rav and other great talmidei chachamim were known to carefully study the piyyutim and derive sublime lessons therefrom.

I must point out the majestic rendition of the Ma’aravis liturgy at K’hal Adath Jeshurun (KAJ) of Washington Heights, where the chazzan slowly chants most of the Ma’aravis selections out loud, with an extremely beautiful and stirring musical nusach in the minor key. One is gripped by the solemn and emotive magnificence of the occasion. If one has the privilege to be in Washington Heights on Yom Tov, experiencing these tefillos at KAJ is an absolute must.

Rabbi Gordimer is a musmach of RIETS and serves as a rabbinic coordinator at OU Kosher. He is a frequent contributor to various Torah publications and Orthodox media outlets, and he serves as Chairman of the Rabbinic Circle at Coalition for Jewish Values. Rabbi Gordimer is a member of the Jewish Action Editorial Committee, the Rabbinical Council of America and the New York Bar.

A project of the Student Organization of Yeshiva (SOY)